The Start screen received several enhancements on Windows 8.1, including an extended "All Apps" view with sort modes (accessed by clicking a new down arrow button or swiping upward), small and extra-large sizes for tiles, and colored tiles for desktop program shortcuts. Additional customization options were also added, such as expanded color options, new backgrounds (some of which incorporate animated elements), and the ability for the Start screen to use the desktop background instead. Applications are no longer added to the Start screen automatically when installed, and all applications now have colored tiles (desktop programs were previously shown in a single color). The app snapping system has also been extended; up to four apps can be snapped onto a single display depending on screen size, apps can be snapped to fill half the screen, and can also be used on any display in a multi-monitor configuration. Apps can also launch other apps in a snapped view to display content; for example, the Mail app can open a photo attachment in a picture viewer snapped to another half of the screen. Improved support is also provided by apps for using devices in a portrait (vertical) orientation. The lock screen offers the ability to use a photo slideshow as its backdrop, and a shortcut to the Camera app by swiping up. The on-screen keyboard has an improved autocomplete mechanism which displays multiple word suggestions, and allows users to select from them by sliding on the spacebar. The autocomplete dictionary is also automatically updated using data from Bing, allowing it to recognize and suggest words relating to current trends and events.[59][60] Similarly to Windows Phone, certain apps now display a narrow bar with three dots on it to indicate the presence of a pop-up menu accessible by swiping, clicking on the dots, or right-clicking.[61]

To improve the usability of the desktop interface, a visible Start button was restored to the taskbar for opening the Start screen, and the Quick Links menu (accessed by right-clicking the Start button or pressing ⊞ Win+X) now contains shutdown and sign-out options. Users can also modify certain user interface behaviors, such as disabling the upper hot corners for using the charms and recent apps list, going to the desktop instead of the Start screen on login or after closing all apps on a screen, automatically opening the "All Apps" view on the Start screen when opened, and prioritizing desktop programs on the "Category" sort mode on "All Apps". To assist users in learning the Windows 8 user interface, an interactive tutorial is also offered, along with a new Help + Tips app for additional information.[58][62] In contrast, Windows RT 8.1 downplays the desktop interface further by not displaying the Desktop tile on its default Start screen at all (however, it can still be manually added to the Start screen).[63]

Windows manager Chaitanya Sareen stated that the restoration of the visible Start button was intended to be a "warm blanket" for users who had become confused by the removal of the button on 8; the Start button was originally removed to reflect Windows 8's treatment of the desktop as an "app" rather than the main interface.[64]

Further interface behavior changes are made on the April 2014 "Windows 8.1 Update", which are oriented towards non-touch environments (such as desktop and laptop PCs) that use a keyboard and mouse, and improve integration between Windows Store apps and the desktop. When a mouse is in use, the Desktop is shown on startup by default, the Start screen uses context menus instead of a toolbar across the bottom of the screen for manipulating tiles, an autohiding title bar with minimize and close buttons is displayed within apps at the top of the screen, the taskbar can display and pin apps alongside desktop programs and be accessed from within apps, and visible search and power buttons are added to the Start screen. In non-touch environments, the default image viewer and media player programs were changed back to Windows Photo Viewer and Windows Media Player in lieu of the Xbox Video and Photos apps.[65][66]

The suite of pre-loaded apps bundled with Windows 8 were changed in Windows 8.1; PC Settings was expanded to include options that were previously exclusive to the desktop Control Panel, Windows Store was updated with an improved interface for browsing apps and automatic updates, the Mail app includes an updated interface and additional features, the Camera app integrates Photosynth for creating panoramas, and additional editing tools were added to the Photos app (while integration with Flickr and Facebook was completely removed). A number of additional stock apps were also added, including Calculator, Food and Drink, Health and Fitness, Sound Recorder, Reading List (which can be used to collect and sync content from apps through OneDrive), Scan, and Help + Tips.[58][67] For Windows RT users, Windows 8.1 also adds a version of Microsoft Outlook to the included Office 2013 RT suite. However, it does not support data loss protection, Group Policy, Lync integration, or creating emails with information rights management.[68] Windows Store is enabled by default within Windows To Go environments.[69]

Windows 8.1 adds tighter integration with several Microsoft-owned services. OneDrive (formerly SkyDrive)[70] is integrated at the system level to sync user settings and files. Files are automatically downloaded in the background when they are accessed from the user's OneDrive folder, unless they are marked to be available offline. By default, only file metadata and thumbnails are stored locally, and reparse points are used to give the appearance of a normal directory structure to provide backwards compatibility. The OneDrive app was updated to include a local file manager. OneDrive use on Windows 8.1 requires that a user's Windows account be linked to a Microsoft account; the previous SkyDrive desktop client (which did not have this requirement) is not supported on Windows 8.1.[71][72][73]

A Bing-based unified search system was added; it can analyze a user's search habits to return results featuring relevant local and online content. Full-screen "hero" displays aggregate news articles, Wikipedia entries, multimedia, and other content related to a search query; for instance, searching for a music performer would return photos of the performer, a biography, and their available songs and albums on Xbox Music.[58][59] The messaging app from Windows 8 has been replaced by Skype, which also allows users to accept calls directly from the lock screen.[59] Windows 8.1 also includes Internet Explorer 11, which adds support for SPDY and WebGL, and expanded developer tools. The Metro-style version of IE 11 also adds tab syncing, the ability to open an unlimited number of tabs, and Reading List integration.[74][75]

On compatible hardware, Windows 8.1 also features a transparent "device encryption" system based on BitLocker. Encryption begins as soon as a user begins using the system; the recovery key is stored to either the user's Microsoft account or an Active Directory login, allowing it to be retrieved from any computer. While device encryption is offered on all versions of Windows 8.1 unlike BitLocker (which is exclusive to the Pro and Enterprise editions), device encryption requires that the device meet the Connected Standby specification and have a Trusted Platform Module (TPM) 2.0 chip.[77][78] Windows 8.1 also introduces improved fingerprint recognition APIs, which allows user login, User Account Control, Windows Store and Windows Store apps to use enrolled fingerprints as an authentication method. A new kiosk mode known as "Assigned Access" was also added, allowing a device to be configured to use a single app in a restricted environment. Additionally, Windows Defender includes an intrusion detection system which can scan network activity for signs of malware. Windows 8.1 also allows third-party VPN clients to automatically trigger connections.[79]

For enterprise device management, Windows 8.1 adds support for the Workplace Join feature of Windows Server 2012 R2, which allows users to enroll their own device into corporate networks with finer control over access to resources and security requirements. Windows 8.1 also supports the OMA Device Management specifications. Remote Data Control can be used to remotely wipe specific "corporate" data from Windows 8.1 devices.[69]

Due to changes to improve its "security effectiveness", the 64-bit version of Windows 8.1 no longer supports processors which do not implement the double-width compare and exchange (CMPXCHG16B) CPU instruction (which the installer reports as a lack of support for "CompareExchange128"). A Microsoft spokesperson noted that the change primarily affects systems with older AMD 64-bit processors, and that "the number of affected processors are extremely small, since this instruction has been supported for greater than 10 years." It mostly concerns Socket 754 and Socket 939 Athlon64 from 2004 and 2005; the Socket AM2 CPUs should all have the instruction. Even if the system does have an otherwise compatible processor, the motherboard must also support the instruction—which can also cause the problem to occur on Intel processors in select cases. These changes do not affect the 32-bit version of Windows 8.1.[80][81]

1 . To use touch, you need a tablet or a monitor that supports multitouch
2 . Microsoft account required for some features
3 . Some games and programs might require a graphics card compatible with DirectX 10 or higher for optimalperformance
4 . Watching DVDs requires separate playback software
5 . Windows Media Center license sold separately
6 . BitLocker To Go requires a USB flash drive
7 . BitLocker requires either Trusted Platform Module (TPM) 1.2 or a USB flash drive (Windows 8.1 Pro only)
8 . Client Hyper-V requires a 64-bit system with second level address translation (SLAT) capabilities and additional 2 GB of RAM (Windows 8.1 Pro only)
9 . Wi-Fi Direct Printing requires a Wi-Fi adapter that supports Wi-Fi Direct and a device that supports Wi-Fi Direct Printing
10 . To install a 64-bit OS on a 64-bit PC, your processor needs to support CMPXCHG16b, PrefetchW, and LAHF/SAHF 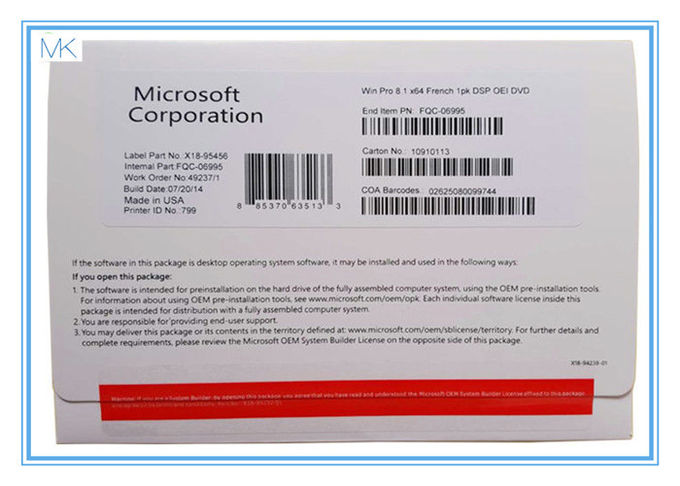