Windows 7 (codenamed Vienna, formerly Blackcomb) is a personal computer operating system developed by Microsoft. It is a part of the Windows NT family of operating systems. Windows 7 wasreleased to manufacturing on July 22, 2009, and became generally available on October 22, 2009, less than three years after the release of its predecessor, Windows Vista. Windows 7's servercounterpart, Windows Server 2008 R2, was released at the same time.

Windows 7 was primarily intended to be an incremental upgrade to the operating system intending to address Windows Vista's poor critical reception while maintaining hardware and software compatibility. Windows 7 continued improvements on Windows Aero (the user interface introduced in Windows Vista) with the addition of a redesigned taskbar that allows applications to be "pinned" to it, and new window management features. Other new features were added to the operating system, including libraries, the new file sharing system HomeGroup, and support for multitouchinput. A new "Action Center" interface was also added to provide an overview of system security and maintenance information, and tweaks were made to the User Account Control system to make it less intrusive. Windows 7 also shipped with updated versions of several stock applications, including Internet Explorer 8, Windows Media Player, and Windows Media Center.

In contrast to Windows Vista, Windows 7 was generally praised by critics, who considered the operating system to be a major improvement over its predecessor due to its increased performance, its more intuitive interface (with particular praise devoted to the new taskbar), fewer User Account Control popups, and other improvements made across the platform. Windows 7 was a major success for Microsoft; even prior to its official release, pre-order sales for 7 on the online retailer Amazon.com had surpassed previous records. In just six months, over 100 million copies had been sold worldwide, increasing to over 630 million licenses by July 2012, and a market share of 47.17% of "desktop operating systems" as of November 2016 according to Net Applications, making it the most widely used version of Windows.

Get connected in three clicks wherever there's a wireless network connection.
Keep documents on your PC and on network servers in sync automatically.
Your PC will automatically use the printer you prefer for whatever network you're on.
Simplify making presentations special settings that keep your PC from sleeping and turn off messages, notifications, and screen savers.
Instantly locate virtually any file, email, or document on your PC just by typing a word or two.
Get around your PC faster with the improved taskbar.
Open programs you use regularly in one click and files you use regularly in just two.
Manage lots of open programs, documents, and browser windows easily with thumbnail and full-screen previews of open windows.
Manage multiple email accounts, including Hotmail, Gmail, AOL, and Yahoo! Mail Plus, all in one place with one simple program.
Get to the files, photos, and music on any PC with Windows 7 in the house from any other.
Print to any printer in the house from any PC with Windows 7 in the house.

Advanced Backup and Restore makes it easier to keep your work safely backed up to external or network drives and accessible if you need it.
File encryption helps keep proprietary and confidential information on a PC secure if it is lost or stolen.
Preserve your investment in programs designed for Windows XP with Windows XP Mode.
Windows Internet Explorer 8 helps keep your PC safer from malware and you safer from fraudulent websites designed to fool you into divulging private information.
Easily add your PC to a secured, managed, network with domain join capabilities.
Group policy controls help administrators more easily and effectively manage the security and configuration of multiple PCs. 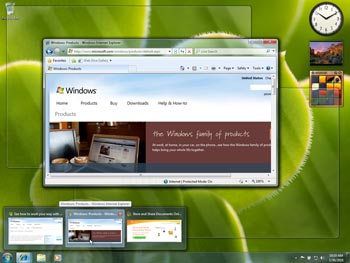